Today Jacob Engelhard found a Aythya-hybrid, at first he suspected that the bird had Ring-necked Duck (Aythya collaris) as one of it´s parents.
After a short talk on the phone we had identifyed the bird as a hybrid Tufted Duck (Aythya fuligula) X Common Pochard (Aythya ferina).
The bird was found during a check of a larger flock of Aythya´s, in Selsø sø in Denmark. 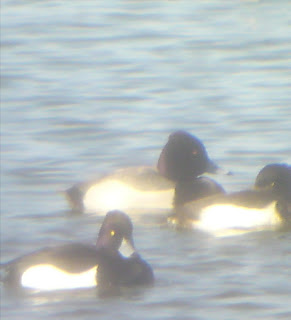 Adult male, even in this photo which is overexposed, the bird is easily identifyed. Note the short semi tuft in the back of the crown, which reveals it as a hybrid. The head has a purple gloss, and the eye was noted as orangeyellow. Note also the black tip of the all dark grey bill. 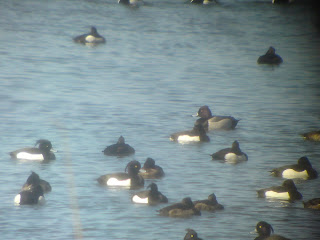 Adult male, note the size of the bird, it is clearly larger than Tufted Ducks. Also note the greyish flanks, a bit darker grey mantle.

If you have some photos of either aythya´s,  melanitta´s or other ducks, we will be glad to receive them, and maybe they´ll be a case on the web. Please send them to malerfirmaetrs@sol.dk
Posted by Rasmus Strack at 6:45 PM