The first Stejneger´s Scoter (Melanitta deglandi stejnegeri) was found by Tim Hesselballe Hansen at Blåvandshuk on the 12 th. October 2009. The bird stayed for the next couple of days and then was only seen briefly in March 2010. Now the bird is back, it has been seen regularly since the 18 th. of Febuary 2011.

This Saturday the 5 th. of March 2011, some of Denmark´s best birders gathered in a common pact, to get some decent photos of the bird.
Tomorrow we will look for the bird again and hope to get better video and photos!

Today Sunday the 6 th. of March 2011, the bird was (to our surprice) not to be found, only the Black Scoter (Melanitta americana) was seen.


This video was filmed the 5. th March in the late afternoon, approximately 1000 meters southeast of the lighthouse. 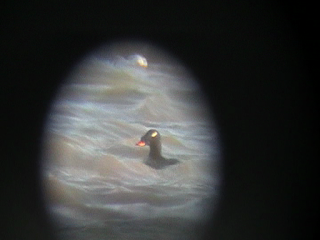 Adult male, note the white "nike-logo" under and behind the eye. The bill color is mostliy red but it has the diagnostic yellow lick along the bill rim. 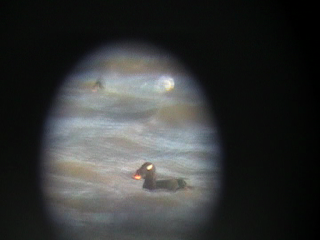 Adult male, the knob is clear, note that the color is mostly yellow form this angle. 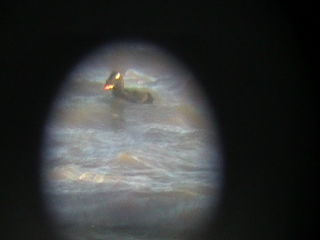 Adult male, note how the profile is similar to that of Eider (Somaterica mollissima).

All these photos is video-snapshots, created by Rune Sø Nerrgaard. Video taken by Rasmus Strack.

Posted by Rasmus Strack at 8:03 PM