The Lesser Scaup is the smaller of the North American aythya-ducks. The length is 38-45 cm. (15-18") and the wing-span is 66-74 cm. (25"). The size is notably smaller than Greater Scaup (Aythya marila), and is more like a Tufted Duck (Aythya fuligula) in size.
It breeds in the western parts of North America, and winters in almost all of the states, down to the northen parts of South America. The species was first reported from Europe, may 1985 in Denmark. Today it´s a frequent vagrant to Europe, with approximately 15-20 records a year. It´s normaly found in freshwater, but in winter it may be found in harbours etc. if freshwater is not accessible.
The jizz of the Lesser Scaup is characteristic. It´s a small aythya with less bulky body than Greater Scaup. It has a short neck, rounded forehead and a distinct squared off "bump" on the crown. The peak of the crown is placed behind the eye and the nape often seems steep with a tiny rounding. The bill is smaller and not so broad as that of Greater Scaup. 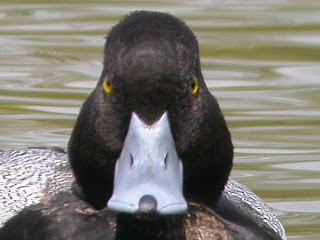 2cy male, note the slim crown and the rounded cheeks. The bill is powerful, and the colour is light steelblue. The nail is black and the length of it is the same as the slim nostril. The bird is aged by the brown feathers on the blackish breast. 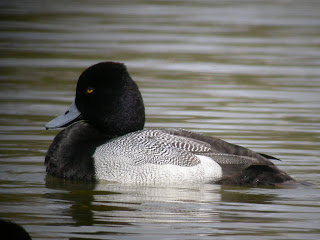 Adult male, note the barring on the back. The slender dark bars makes the back brighter than rump. The black barring broadens the further back it goes towards the rump. The tertials seems almost black at a distance. The flanks are normally darker in front than further back.
The peak of the head is behind the eye, and note the tiny rounded nape. The black nail of the bill is normally hard to see from this angle. 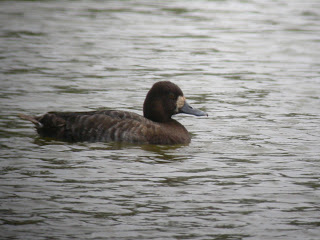 2cy female, note the typical headshape with the small bump in the rear of the crown.
The white spot surrounding bill-base is normally offwhite, compared to the pure white on Greater Scaup. The bird is aged by the dark brownish iris, in adult it´s dull yellow. 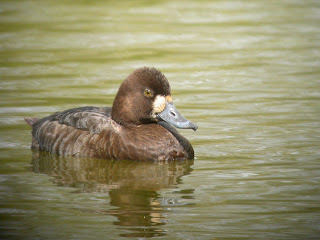 2cy female, same as above. Note how the white at the bill-base is broader off the eye. Often it´s just a small rounded spot on top of the bill, and might be missing underneath. The bill is brighter coloured than on Tufted Duck. Note how the slim nostril becomes obvious, do to the fact that the colour surrounding them is brighter  than the rest of the bill.


This 2cy male was filmed at Rosklide harbour Denmark in March 2010. This was only the 7th. danish record. Note how the colour of the head changes form green to violet.
Posted by Rasmus Strack at 9:32 PM